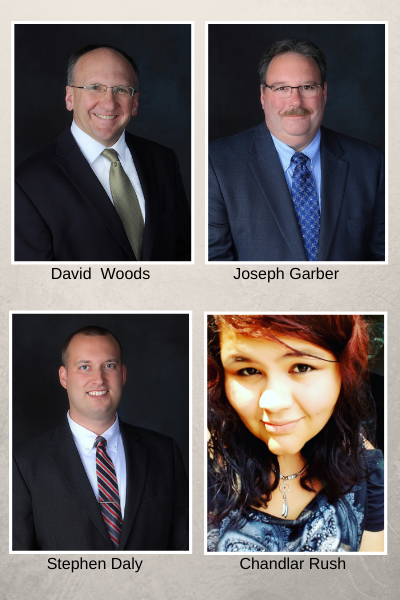 David A. Woods  has been promoted to Senior Vice President & Chief Loan Officer. Woods joined the bank in 2018 as a Senior Vice President & Senior Loan Officer. Woods earned his Bachelor of Science in business administration from Central Michigan University in Mt. Pleasant majoring in finance with a minor in economics. He then graduated from the University of Detroit earning his master’s degree in business administration again majoring in finance with a minor in economics.  Woods has also earned his secondary education certification from Ferris State University in Big Rapids in April of 2018. He and his wife Connie reside in Petoskey and have two grown sons.

Joseph P. Garber has been promoted to Senior Vice President & Chief Credit Officer. Garber was hired in 2018 as Vice President, Credit Manager.  Garber earned his Bachelor of Science from Ferris State University in Big Rapids majoring in accounting. Throughout his career he has completed many industry schools and seminars including Omega Commercial Loans to Business, Credit Camp and Cash Flow for Business. Joe and his wife Cindy reside in Alpena and have a grown son.

Stephen J. Daly began his CNB career as a credit analyst and having completed its business banker training program has been promoted to Business Banking Officer. In 2012, Daly earned his Bachelor of Science from Michigan State University majoring in finance.  Since graduating he has worked in the financial field, joining Citizens National Bank in 2018. He and his wife Kelsey, a schoolteacher in Boyne City, reside in Petoskey with their infant son Connor.

Chandlar E. Rush has been promoted to Technology Officer.  Rush began her career with CNB in July 2013 as a teller at the Alanson branch. In 2015 she transferred to the Support Center and in 2016 to the Information Technology department. This year Rush was instrumental in developing, managing, and expanding a new department, Operations Administrative Support Center.  She and husband Tim reside in Cheboygan with their animals.