Tromble Elected Chairman of the Board 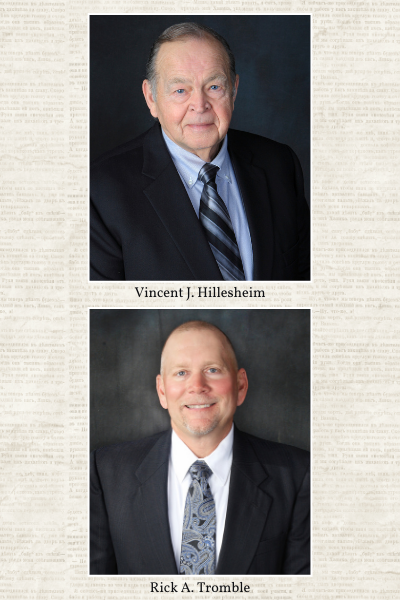 At the organizational meetings held September 22, 2020, Rick A. Tromble was elected to chair the Citizens National Bank board of directors and its holding company, CNB Corporation.  Rick succeeds Vincent J. Hillesheim who has served as chairman of both organizations since May 2006 and will continue to serve in the position of past chair.  In commenting on the election President & CEO Matthew E. Keene expressed his appreciation to both men and the boards of both organizations for their forethought in assuring a transition period prior to Vince’s retirement from the board in May 2021 due to an established age limit policy.

Vince joined the boards of Citizens National Bank and CNB Corporation in 1994 and upon his retirement will have served 27 years, 14 of those as chairman.  Prior to being elected chairman, Vince chaired the audit committee of CNB Corporation from 2003 to 2006. Much of the knowledge, experience and understanding Vince has brought to the boardroom has come from his years as a businessman.  He retired as President of Anchor-In Marina of Northern Michigan, Inc. and throughout his career operated and managed a number of small businesses gaining experience in commercial property management, budgeting, personnel, finance and government regulations. As a supporter of the Cheboygan area, Vince is a long-standing member of the Cheboygan Downtown Development Authority and has also served on the Cheboygan County Building Authority, Cheboygan Chamber of Commerce board and the Cheboygan Catholic building and finance committees. “Vince has been an invaluable member of the board and someone I have come to lean on during my inaugural years as president & CEO. He has become a mentor and I am thankful for his leadership and guidance,” said Matthew Keene.

In assuming the role of chairman Rick also possesses a business acumen that will serve both organizations well.  He has been a director of Citizens National Bank since June 2012 and a director of CNB Corporation since May 2013. As a 40-year member of the Institute of Management and Accountants and an entrepreneur, Rick has owned and operated several successful businesses. He developed and served as President of a $100 million restaurant company and established Tromble Bay Farms, Inc. in Cheboygan.  As the largest farm company in Cheboygan County, Tromble Bay Farms encompasses over 4,000 acres raising beef cattle and crops and includes the Tromble Equestrian Center. Rick graduated from the University of Michigan with a degree in accounting and business administration and now serves as an advisory director to its School of Management.

Rick is no stranger to northern Michigan and the Cheboygan area having built his first home on Mullett Lake in 1980.  He and his wife Michele moved with their two daughters to Florida in 1987 when they purchased their first Taco Bell restaurant, eventually owning 65 of the franchises before selling them in 2008. The Trombles came back to their home in Cheboygan and in 2005 found another niche in the business world and began growing and trucking hay to Florida.  Rick was also instrumental in bringing Orion Renewable Energy to northern Michigan, a $90 million solar energy project.  As supporters of the Cheboygan area the Trombles established a family foundation and have contributed a 40-acre parcel of property in Inverness Township to the Little Traverse Conservancy to become the Tromble Family Nature Preserve.  Looking forward to working with Rick, Matthew Keene noted “Rick’s breadth of experience and entrepreneurial background certainly qualifies him for the duties as chair and will serve the board well.”